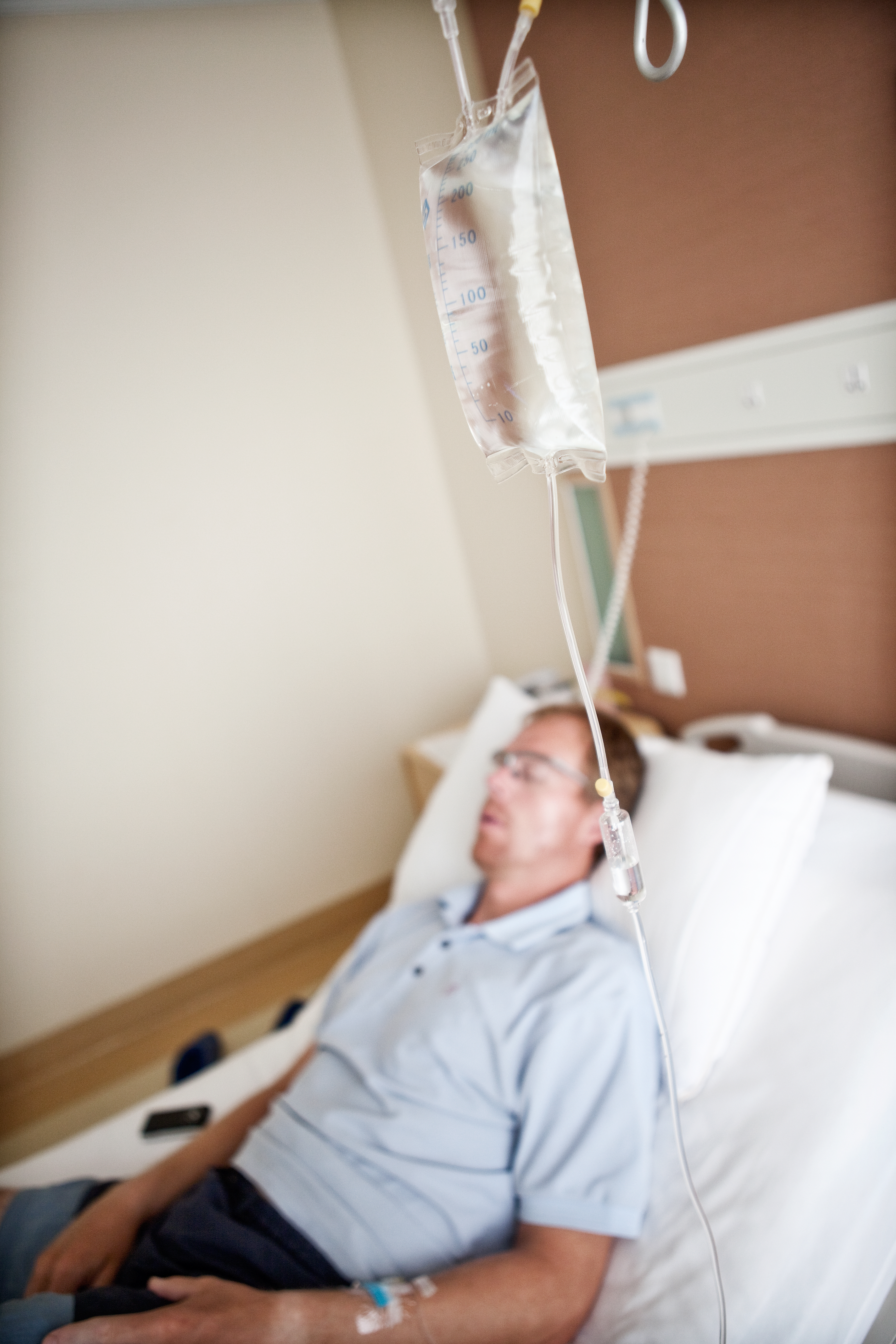 Sometimes the unexpected happens.., and sometimes it’s a little too much adventure to your liking. While walking around in Xiahe, Elmars knees suddenly swoll and started to hurt real badly. The pain even extended to his wrists and ankles… this story is a summery of what happened on our cycling adventure during a 3-month sabbatical.

Oldest news at the top

On october 4th at 2PM after cycling 69 kilometers we cycle into Xiahe and find ourselves a hotel not too far from the monestary. Elmar rubs his knee, his right knee hurts a bit. The last couple of days have been tough; every day at least 5 to 6 passes to climb, that is hard for the body.

October 5th: we visit the monestary, and a monk is leading us through the different areas. Elmars knee is stiff, but ok, he says. The entire day we walk around, up the stairs, down the stairs. I can see he’s hurting..
“El, you go back to the hotel and have a rest. You’re in pain.” He reluctantly agrees  and drags himself one more time up the stairs to our room. That night his knee is swollen, red and stiff and he is in a lot of pain. Dr. Ellens conclusion: inflammation because of overload. A Chinese doctor comes over, has a look, mumbles something which is supposed to be a diagnoses.. well, I say: rest.

October 6th: Elmar has had a bad night, he’s in so much pain and can’t walk anymore. I bring him to the toilet and the shower and help him into bed. I try Dr. Google. Apart from his knee he also has an inflammation of the eye and his bladder! So, I find a pharmacy and antibiotics.

October 7th: His eyes and bladder look better, knee a bit less swollen. We decide he needs to have a couple of days rest. Xiahe isn’t the best place to be, no hospital and it’s cold, no more than 12 degrees Celsius in our room, too cold. I arrange a taxi to bring us back to Hezuo, to the hotel we stayed before, here’s warm water and a heater in the room.

October 8th: we leave to Hezuo within half an hour, I already carried Elmar down the steps and the bags and bicycles are next. We are on our way to a warm room and a warm shower. We’ll have a couple of days rest in Hezuo and hope he will recover soon…

Update october 14, 2009: throwing in the towel
We can talk for ages, but that doesn’t change anything to the situation. Elmar is in so much pain and bedrest for 10 days didn’t help anything, we have to call it. It’s time to throw in the towel.
Elmar can’t sit, can’t stand up, can’t walk and his butt starts to hurt after such a long time lying in bed. Last night we called our insurance company to help us. This afternoon an English speaking doctor will fly to us from Beijing and he will guide us to a better hospital in Chengdu. We will be evacuated. But before we can fly home, a doctor needs to examine him first..

Without us knowing, october 4th was our last cycling day, almost one month sooner than we had planned. We cried together and we will beat this thing together. It is what it is, here our bicycle adventure in China ends…

Update october 16, 2009: evacuation to Chengdu
A docter flew in from Beijing to our hotel in Hezuo and performed a first examination, he’s thinking of some kind of inflammation. Elmar is having fever and he’s in pain, not just one knee, but both knees, his wrists and ankles. All are swollen. He can’t sit, he can’t stand up and walking is out of the question. I carry him, wherever he needs to go.

On october 15 we leave Hezuo together with our doctor at 5 AM in the morning, a van takes us to Lanzhou Airport. In the van they’ve made a bed for Elmar and all our luggage and bicycles are coming along. The doctor is here to guide us, to evacuate us to Chengdu. The ride in the van takes almost 5,5 hours (!!!) and was no fun for Elmar… In Lanzhou we were supposed to fly business class so Elmar would have more space, since he can’t bend his knees, but unfortunately the plane only had economy class seats, so we had to litteraly squeeze him into the seat, hellish for him and he had to sit like this for about 2 hours…
We were so lucky with our private doctor, he took care of everything and we didn’t have to worry about the bicycles, extra payment, our luggage.. all was taken care of. Finally we arrived in Chengdu and an ambulance was already waiting for us to bring us to the hospital where we arrived at 5 in the afternoon… wow.. we live 10 minutes away from the nearest hospital.. makes you think…

The hospital already had a private room ready for him and I was allowed to stay with him (sleeping on the couch, but I didn’t care!). Immediately they started doing tests and the doctor here started treating him for imflammation, so he’s on antibiotics and some Chinese stuff. They expect him to stay for at least a week.

Pain is less now, but still can’t bend his knees, so I’m here to carry him to the toilet and to shower and dress him. His joints are less swollen and we think he’s improving little by little: he started to make jokes and bosses me around! 😉

Hospital is fine, people friendly and our insurance company, the Europeesche, keeps in close contact and are arranging our visum renewal as well. They are the best!

Time will tell what will happen next…

Update october 20, 2009: your temperature is seventy-three degrees Celsius!
..that’s normal! says our nurse. Owkee… I guess she means 37 degrees…
Well, another update. Initially things went better, the pain in his knees was less, but all of a sudden Elmar had a strange, sharp pain in his calf and his wrist is showing no improvement. They’ve tested the vain in his calf and they believe he has a small blood cloth here, not big enough to cause any serious problems, but it means flying is out of the question at this moment. Apart from blood thinners, he’s still on antibiotics because the infection is one nasty bitch. Doctors say he’s improving, but slowly…

The last couple of days he’s out of bed, shambling about our room a bit and he was able to go to the toilet all by himself again. Doctors and nurses are really friendly here, but we’d rather go home. The language is a problem sometimes and the Chinese television just sucks! We constantly have contact with our insurance company and so do the doctors and as soon as he’s without fever for a couple of days, we might be able to come home.

The days are very long…

Update october 28, 2009: Fit to fly
Finally some good news…
About three hours ago our insurance company called to confirm our flight home! Thursday october 29 we’ll fly back to Amsterdam to set foot on Dutch soil that same night. Elmars fever is gone for two days, so Elmar is ‘fit to fly’.
The insurance also arranged for transport from Schiphol airport back to our house and the next day our own doctor will pay us a visit to see how we’ll continue his treatment. He’ll probably needs some physio, since he still can’t move his knees and all his muscle tissue is gone. He now has these very thin legs and shambles like an old man!

We are tired… Elmars ass is hurting because of all the time lying in bed and tomorrow on the plane he will be wearing these sexy socks! But this time we are actually happy to go home…

Update november, 2009: the diagnoses
Elmar was diagnosed with Reiter disease, some kind of rheumatism. But he’s strong and improving by working very hard. He manages to shamble around the block a bit and with physio he slowly can move his knees better. So far, the inflammation is diminishing and his blood shows improvement too, so no need for lifetime medication. He’s strong, he’ll get there! And I will be there to help. We are both confident he will make a full recovery and we’ll be back on the bicycles soon!

Tajikistan: up into the snow

To Mestia and beyond