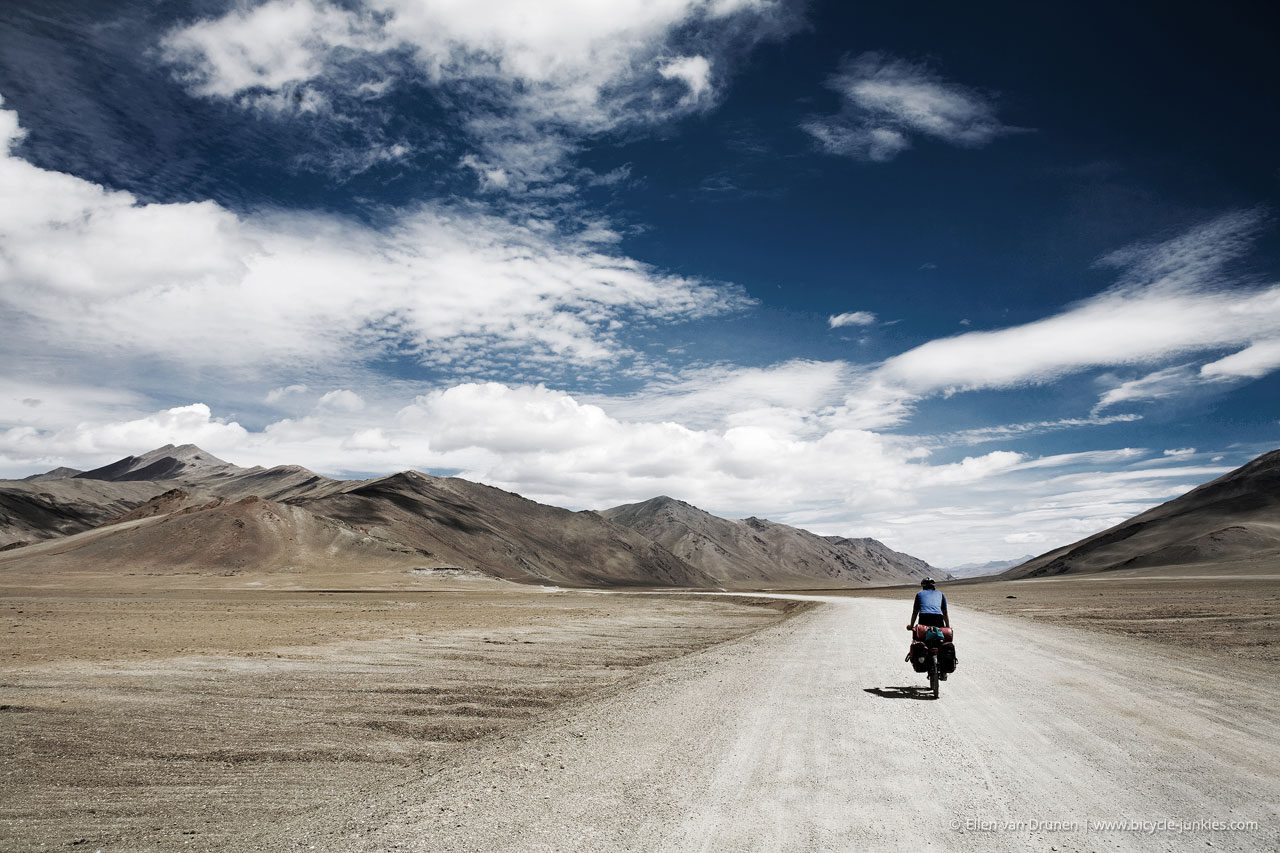 India: into the Himalayas

Jeezzz, this is too much! It hurts.. I’m nackered. I lift myself up from the saddle and use my own weight to push the pedals round. With a last effort I manage to keep the cranks turning and I crawl further up into thin air. I can see the pass.., I saw it this morning for that matter! It’s still 20 painful kilometers away from me. In the distance; the Tachlang La with no less than 5331 meter one of the highest motorable passes in the world. It would be so much easier to just turn around and quit, but I just won’t…

A little more than two weeks ago we started this bicycle tour through the Indian Himalayas and by now we have conquered four high altitude passes, ranging from 4550 meter to 5100 meters high! And here, in this barren landscape the last ‘pimple’ lies ahead of us. My breathing makes squeeky noises, my longs hurt while I take deep and short breaths. I cough and throw up. I get off the pedals and rest my head on the handle bar. I need to throw up again, but there’s nothing left in my stomach, I actually can’t remember the last time I had a decent meal. At this altitude I don’t feel like eating at all and that makes me weaker and weaker… Elmar forces me to drink, but within two seconds the fluid is lying on the dusty road again. How the hell did I get here? 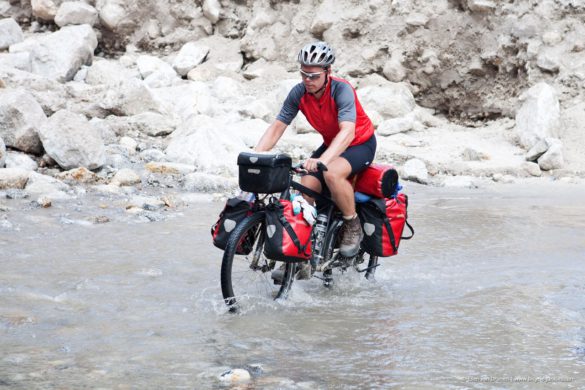 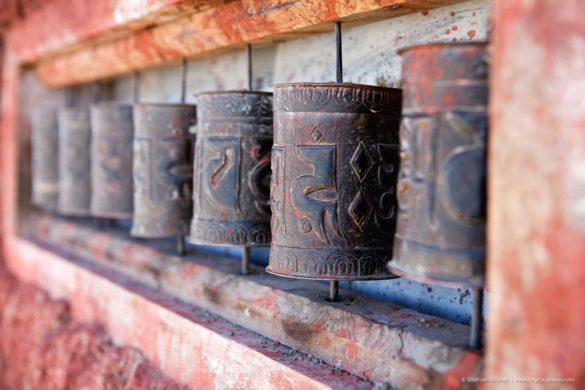 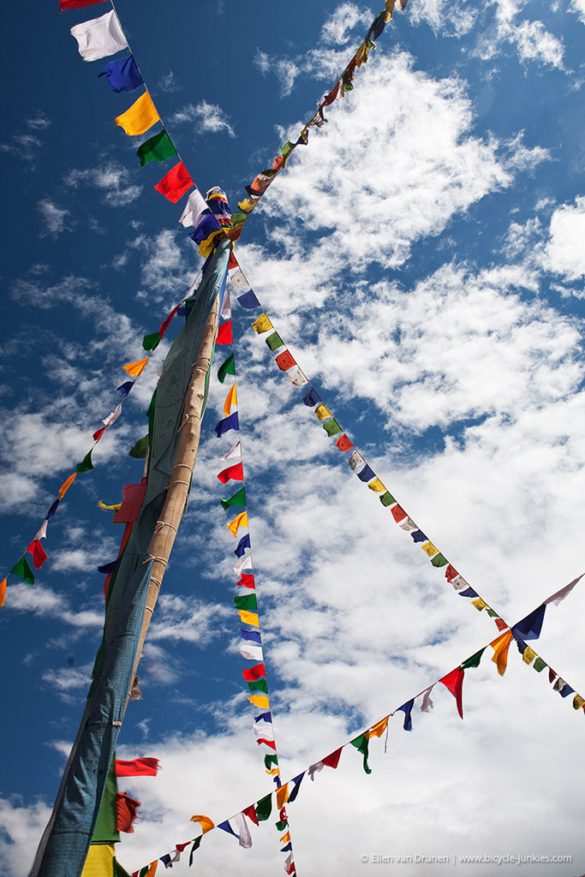 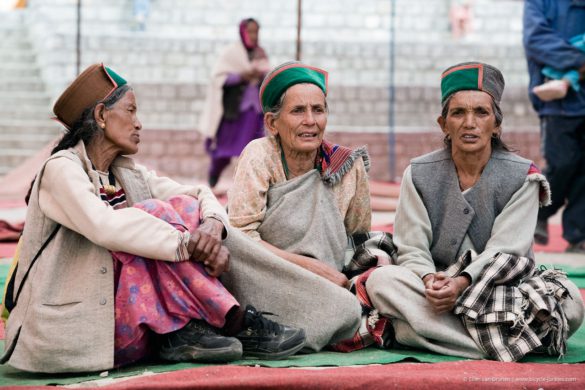 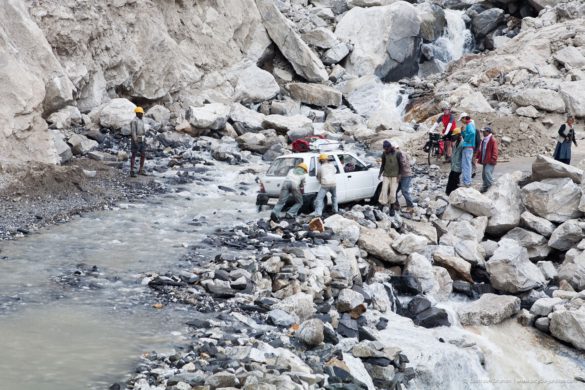 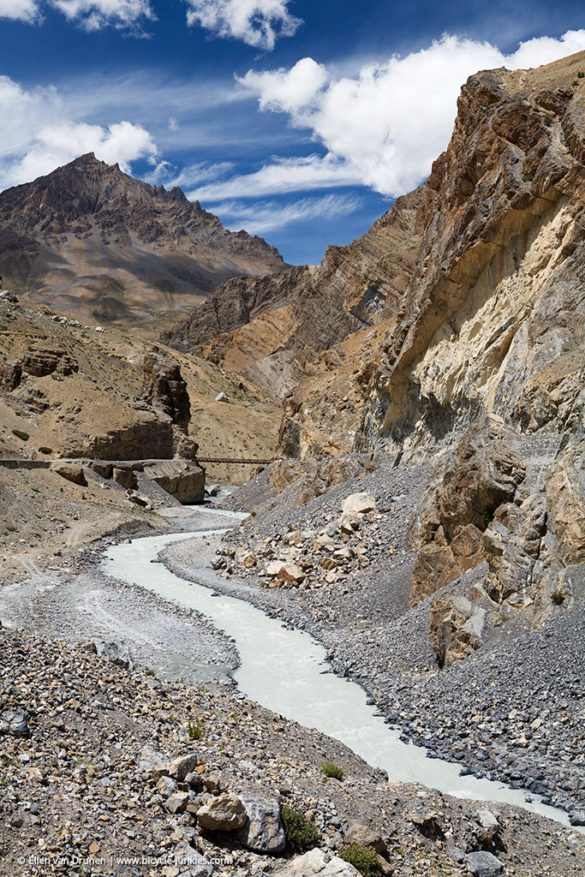 “That’s our next cycling destination!” Elmar is holding an old, highschool Atlas book in his hands and points his finger to Northern India. Hmmm, India..; poverty, people everywhere, not really my kind of thing. “Does that sound like fun to you?!?!” I ask him. “Fantastic! The highest mountain passes in the world and we will be cycling them!” I see the glow of happiness on his face. “Well, what do you say?”

Nothing but mountains surrounding me and the emptiness is overwhelming. We crawl up alongside the mountain, deep down in the valley we see six simple tents and a few yaks grazing near a small stream. There’s not a lot of grass here, but apparently it’s enough for these animals to survive. A man on a horse trodges along his cattle and slowly makes his way up into the valley, following us in the same speed. A few hunderd meters ahead of me Elmar has stopped and is drinking filtered water from his bottle, he’s waitig for me. I keep pushing and come to a stop next to Elmar, we both are panting and turn around the see where we’ve come from. The landscape is dry and barren, only high on the mountain tops we discover some snow. A couple of curves beneath us a truck slowly makes his way up to the pass, panting just like us, in thick black exhaust. The heavily loaded ‘Tata’ Truck is so wobbly, it’s a wonder it isn’t falling over the edge. The Sikh man behind the wheel honks his horn, waves and slowly passes us, leaving us in a stinky pitch black cloud. We get back on the Santos bikes and are in pursuit of the Tata.
One, two.., one, two.., one, two. I’m dancing! I can feel my heart beat in my throat, but the pass is getting closer and closer. I keep going. One, two.., one, two.., one, two. I pull my handle bar and push the pedals around, swaying from rock to pot hole and from pot hole to rock. I feel the muscles in legs aching, nausea settling in. But, I keep going. 200 meters to go! 150 meters! Elmar just made it and turns towards me. 100 meters! What is 100 meters? It means nothing in the Netherlands, here at 5300 meter altitude it’s pure pain. 20 meters.. 20 steep meters and I’m finished. Tears are rolling down my face and I’m gasping for air. Emotions are running around my body and I’m trembling next to my bicycle. Elmar walks towards me. “Here, let me help you.” He pushes my bike to the top, I follow with wobbly legs and plop down on a wall of stones. We made it. Incredible, here we are. After the pain comes happiness and pride.. and a long downhill! 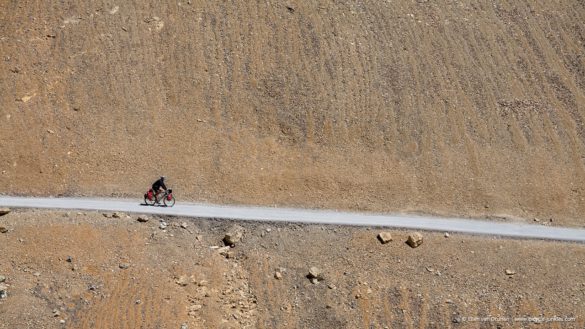 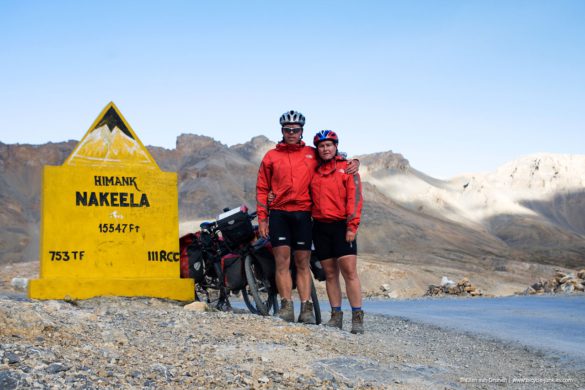 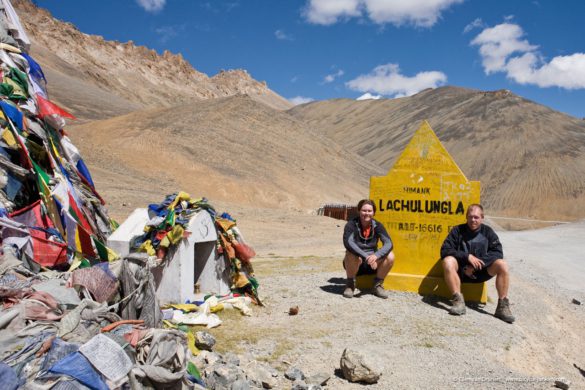 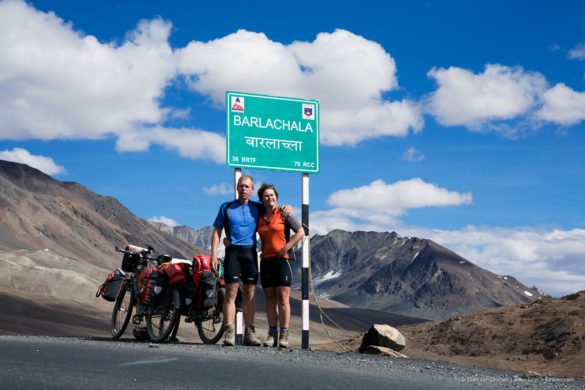 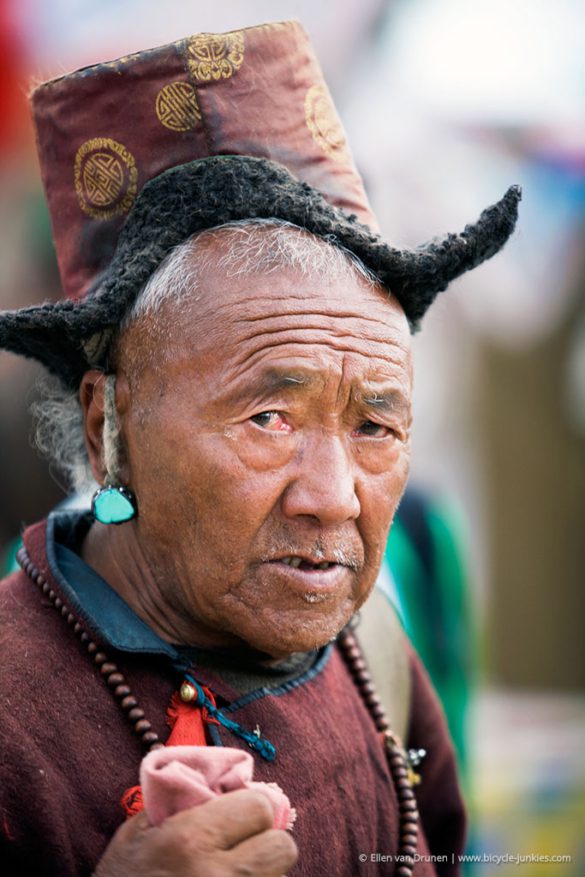 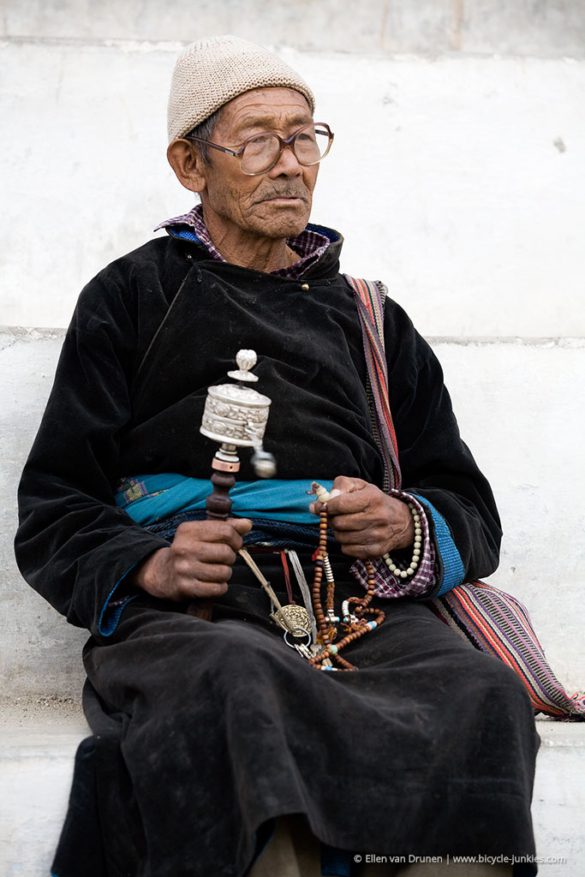 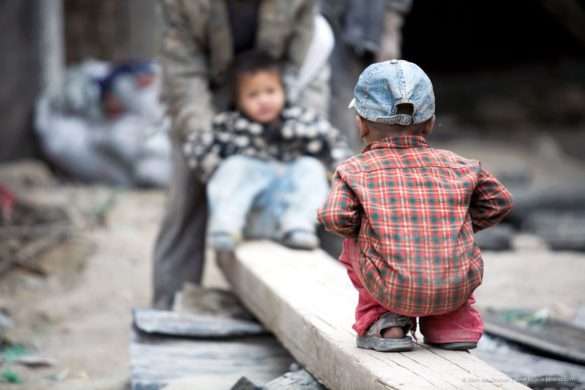 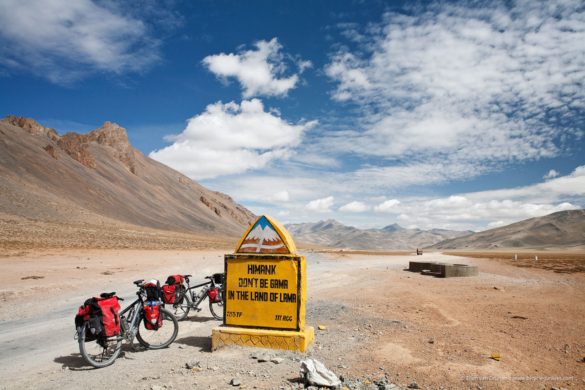 To Mestia and beyond