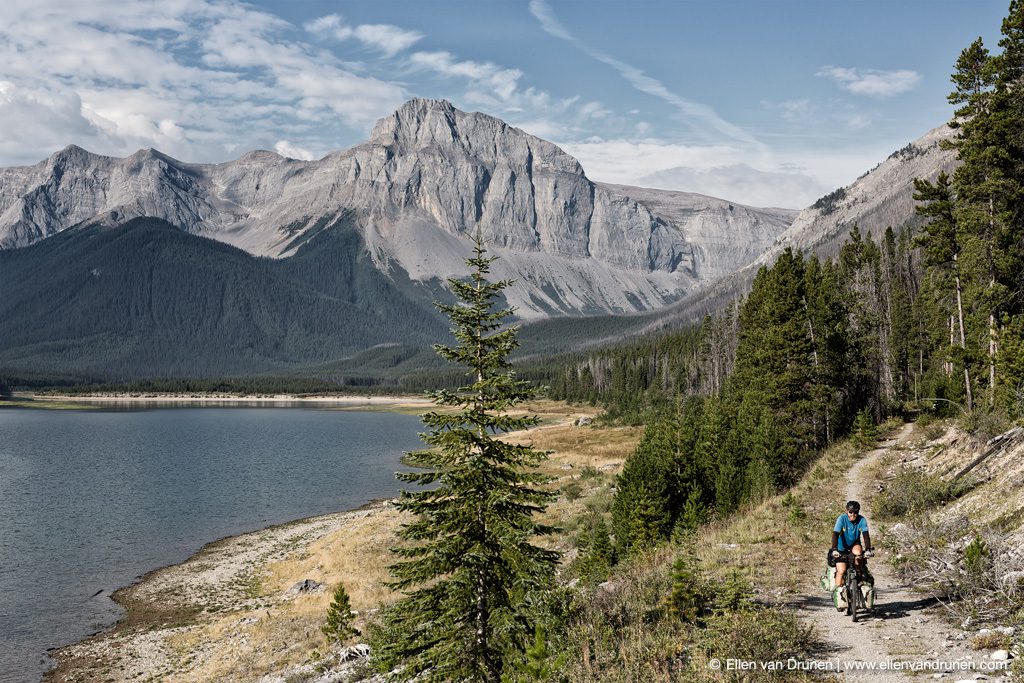 With no more than one day left on our United States visa, we leave the States behind us and continue our ride into the last country we’ll visit here in the Americas: Canada! The smoke doesn’t care about borders though and follows us right into Canada as we cycle into Waterton National Park. I dare not ask for rain, since in 2010 I wished for it and it never stopped raining!

As we cycle on a real bicycle path into Waterton NP a car stops next to us: “hey guys, there’s a bear right ahead of you! Maybe 200 meters from here!”. “Thanks for the warning!” Yes, bear number 5! Paul, Jan, Elmar and I group together as we slowly continue, carefully looking around us. Paul and Elmar spot the black bear first, he’s using the bicycle path! How dare he! We shout and it runs off into the bushes before I can grab a pic of the animal. Better luck next time! 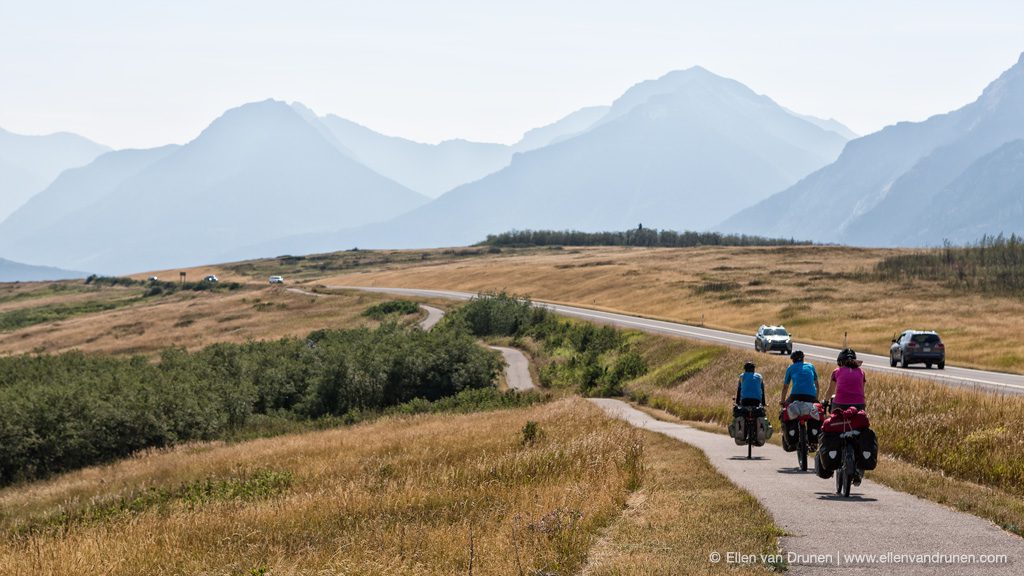 The next morning the smoke is even thicker and we decide to continue, since there’s literally nothing to see! It’s time to cycle back to the Great Divide Mountain Bike Route and we set cours for the Crowsnest Pass (another extra divide crossing) and to Sparwood, where we pick up the trail. We leave the asphalt (and the cars behind) and continue on dirt tracks. Near Elkford a landslide prevends us from following the trail and we detour on another logging road; climbing up and overlooking the valley. Both Paul and I spot a ‘bicycle path’ on our GPS’s and we decide to give it a try! Apparently it’s a very little used mountainbike track; in places too narrow and too steep for our loaded bikes, but hey, we want some adventure! Here we go! 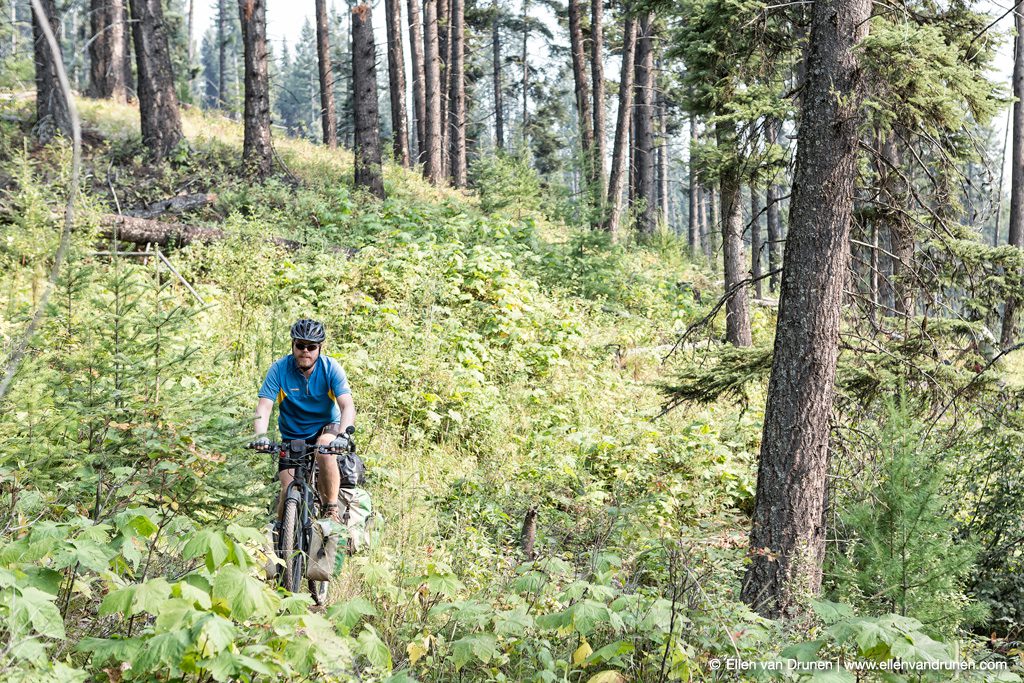 The last continental divide crossing of the GDMBR lies just ahead of us and is called the Elkford Pass. It’s a rollercoaster ride up and no cars are allowed on the last steep part. We so romantically cycle between power poles as we cross the monumental marker; no sign, no fanfare, nothing! Just the four of us on a drowsy and smoky day. But, as we set up camp that night it starts to rain a bit and we have good hopes for a clearer view in the morning! 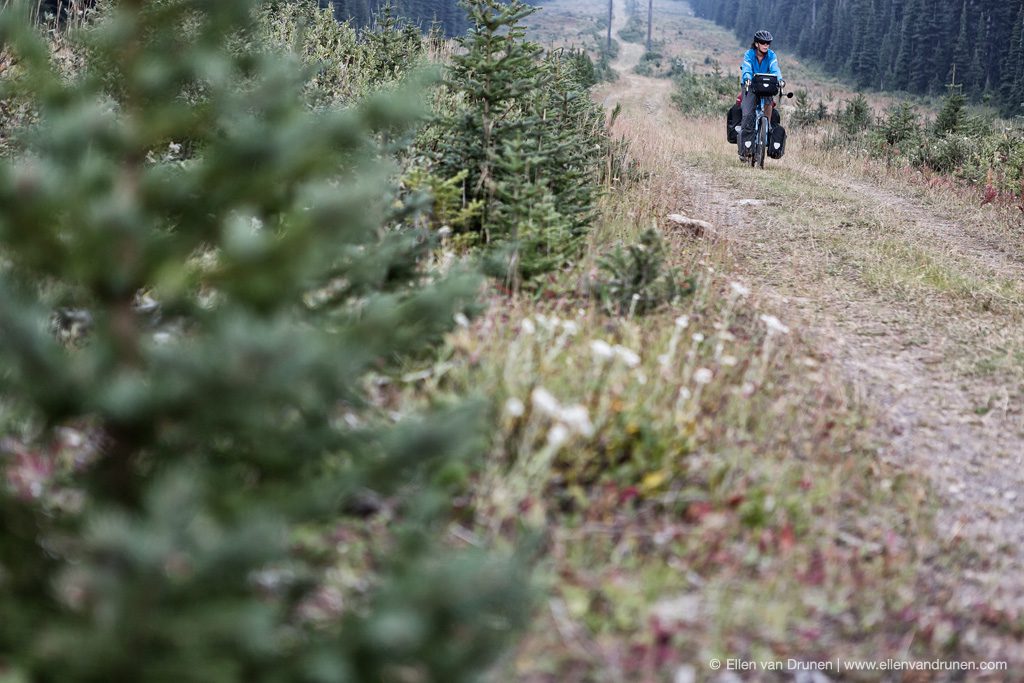 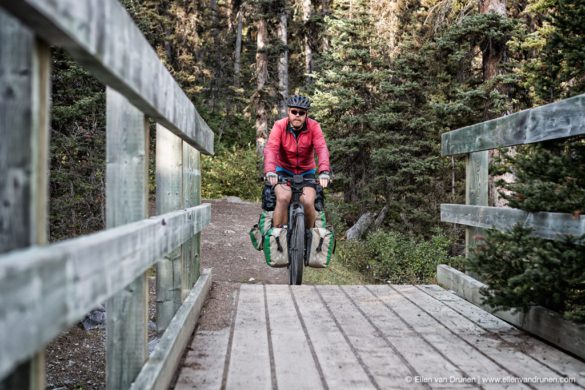 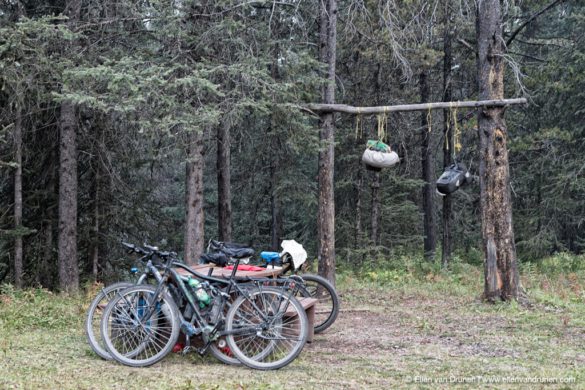 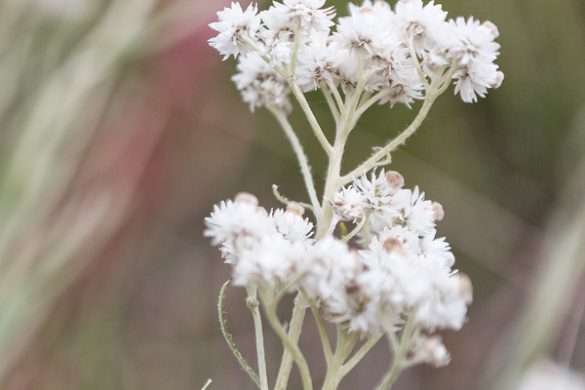 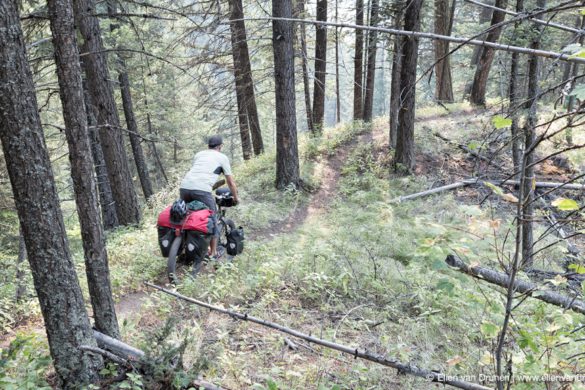 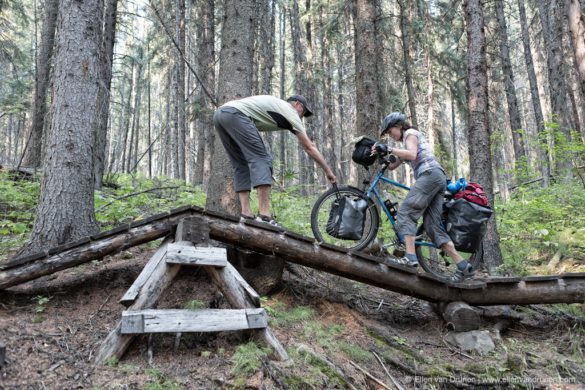 When we wake up, it’s still windy but the smoke seems to have lifted a bit and for the first time we have a somewhat ‘good’ view on the peaks that surround us. I have to say, while cycling along the Spray Lakes reservoir, this part of the GDMBR is one of the most rewarding ones. The landscape is just fenomenal and the track is a single track meandering through the pine forests with some amazing views on the Rockies and the lake…it is, as the Canadians say, just ‘awesome!’ 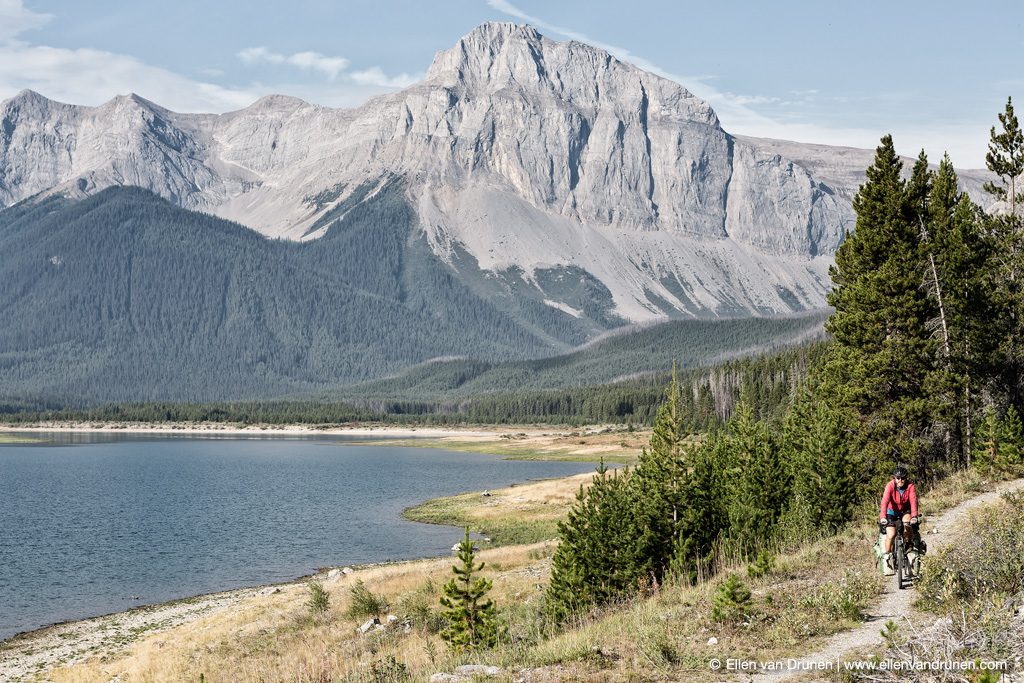 Elmar cycling on a single track along the Spray Lakes

Banff Springs Hotel; the end of our bicycle ride on the Great Divide Mountain Bike Route. And yet again; no sign and no certificate of our victory. It’s tempting to soak our tired bodies in the springs as a reward, but we settle for a Chinese run mid-sixties hotel, where Paul & Jan get the most ugly honeymoon suite ever! We do celebrate our ride though with a great steak and a bottle of wine. Cheers!
BanffCrowsnest PassGDMBRWaterton National Park
12 comments 0 FacebookTwitterPinterestWhatsappEmail
previous post

Love your pictures, but they make me trail sick, sort of like home sick but just the opposite. We are in the middle of buying and selling a house, remember what those are? Fires and smoke here in California too, sorry but we are praying for lots of rain. Happy trails. …Cisco & Roadrunner

So nice to see the update! I love your pictures and narrative! Any new videos from you? Please accept my best wishes!

Thank you so much for the compliments Cisco & Roadrunner!
I hope it will start raining over in California (and not here!) 😉

Thanks Joao! We are way behind with our videos… sorry, but as soon as we have some time left we’ll edit and publish the videos!